With a record number of around 800 participants, Pyrus’ annual soil drilling contest this year was a ‘huge success’. WUR team Aspergus Maximus took the prize home for the fourth consecutive time.

This was the first time Gert Peek did not join. Last year was the last time the lecturer in Soil Science acted as head referee. This year, the role was taken on by lecturer in Hydrology Roel Dijksma. ‘And to still feel his presence a bit this year, we introduced the Peek Trophy: a prize for the team with the best attire.’ Dijksma saw such characters as ‘jesters, gnomish people, someone who had transformed a shopping cart into a kind of car with Nelson Mandela in the front – I am still unclear as to what that was supposed to be, and many, many more. It was a very diverse and colourful troupe.’ Besides the carnivalesque aspect, Dijksma also enjoyed the participants’ passion. ‘That competitiveness between the participants is so beautiful. People really go all out to win. This is a true championship!’

The Wageningen team Aspergus Maximus took the prize home for the fourth consecutive time. Dijksma: ‘Drill to 1.20 m in less than a minute… That is simply amazing.’

(article continues below the photos) 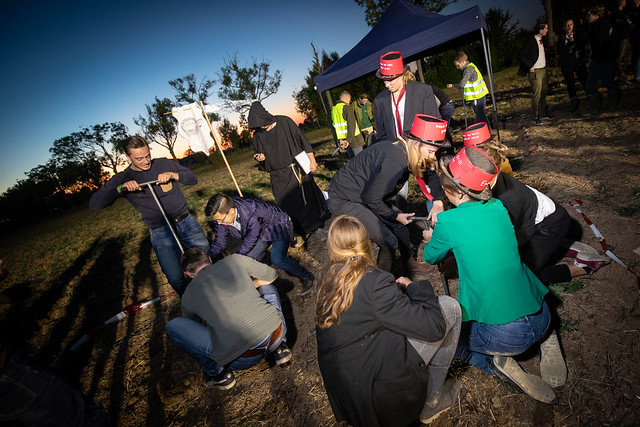 Clay dolls
The weather was excellent for the time of the year, Dijksma adds. ‘It did not rain much, which meant that people did not look like clay dolls after two hours. That was a great bonus.’

The record number of participants did not cause any problems regarding space. ‘It is a large field. You have to create a few extra competition fields. Fine, so you create fourteen instead of ten.’ However, the new schedule did turn out to be a limiting factor. ‘As the lectures now continue until later, the teams did not arrive gradually, but we had a huge simultaneous inflow of people instead. With those additional participants, it did make for long queues.’

Consider everything, it was a magnificent twentieth edition of the soil drilling contest, Dijksma says. ‘We had a great atmosphere, and everything went really smoothly. A substantial thanks and compliments to Pyrus: they did an amazing job of organising it once again.’

Check the video of the soil drilling championship here.