Uzbek food, Chinese music and partying African-style. During One World Week from 30 March to 5 April students and staff had a chance to savour the great cultural diversity of the WUR community. Resource dropped in on a Chilean wine-tasting and a Nepalese party.

Latin American tunes blare out in the crowded Impulse building, which is decorated with a blue-and-white flags with a star on them. There is a smell of wine. Chilean wine, you understand. For One World Week, Chilean WUR students are running a wine-tasting event.

Over 100 students and staff members are sipping at their glasses, for some of them the last of four glasses of wine they could taste. ‘I’m a bit sloshed already,’ says chemistry lab assistant Guillaume ten Dam. On the table beside him stands a bowl of sopaipilla, fried pumpkin bread in a spicy sauce. ‘I needed the snacks, otherwise I would keel over.’ He didn’t really like them though, any more than he liked the wine. PhD candidate Ying Deng is a lot more enthusiastic. ‘This is really high quality. Better than expected.’ She didn’t realize Chile was a major wine exporting country.

There is a mixture of people here, but it is striking how much Spanish one hears – and at the volume you would expect. Last year the tasting ended in a spontaneous Latin American party for 200 people, prompting WUR to set a limit of 100 for this year. It was fully subscribed within a couple of days, says Begoña Arellamo of the Chilean student organization.

The visitors to the city centre living room called Thuis look up in amazement from their plates full of Nepalese treats as loud Asian music suddenly blasts out of the speakers. Now they understand why the chairs are arranged in rows. Four Nepalese students start dancing in traditional red and blue dresses. ‘This is really cool,’ says the Italian Master’s student Alice Caranchini with conviction. She deplores the lack of such dancing and costumes in Europe. Caranchini is one of the guests at the party the Nepalese student community is throwing for One World Week. Wageningen resident Jacquelien Kok has come along too and is watching guests who are now hesitantly trying to imitate the moves of the elegant dancers. ‘We are so wooden by comparison,’ she says.

The Nepalese students come around with a big pan. Its contents have a famous flavour, apparently: rice pudding, but then with onions in it. There are also fried savoury biscuits and a spicy salad on offer. Lois Dejalle, a volunteer at Thuis, enjoys it all thoroughly. ‘Normally you never get to taste food from countries like Nepal. I really like the fact that you can do so in One World Week.’ 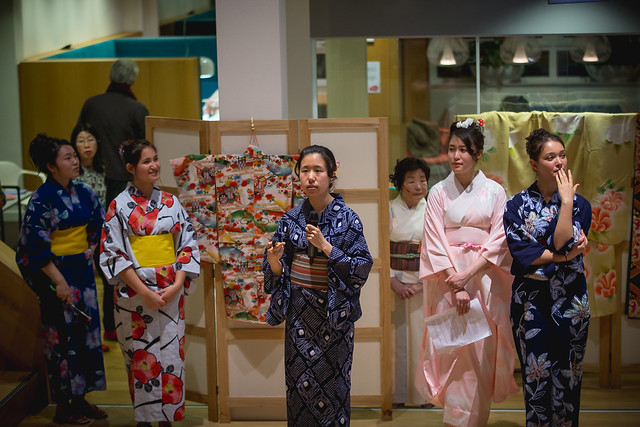