King Willem-Alexander opened an international dialogue on the international food supply during the World Wide Wageningen Alumni Reunion, this Saturday. Afterwards, he planted a tree on the campus.

During the World Wide Wageningen Alumni Reunion, Wageningen graduates were presented with a programme filled with lectures and stories from alumni, but they were also able to visit the Innovation Square to learn about Wageningen discoveries. There were also guided tours, a cooking event, a performance by Rob Urgert, and entertainment provided by alumni. Alumni were able to seek out and meet each other at the Meet & Greet Square, located at the festival area on campus. Roughly 2100 Wageningen alumni made their way to the reunion.

The king opened the World Wide Dialogue, during which Rector Magnificus Arthur Mol exchanged ideas on the international food supply with alumni and experts in China, Colombia, the United States, and Ethiopia. While being broadcast on a live stream, they discussed issues such as malnutrition, obesity, food waste, the increased prevalence of processed foods, and the sugar tax. People in the room were able to tweet their questions. The most innovative question on Twitter: Why are there no tax exemptions for healthy foods, such as fruits and vegetables?

Rubber tree
Afterwards, the king planted a tree on the campus. More specifically, he added the last few scoops of soil around the base of the tree. He planted a climate-resistant rubber tree, Eucommia ulmoides. This tree produces rubber and is able to weather fluctuating water levels and high winds. According to WUR, the tree is symbolic of the research at WUR into trees, forests, and the biobased economy.

Between discussions with the companies, the king also found some time to chat with several Wageningen students.

You can also take a look at Guy Ackermans’ photos of the reunion. 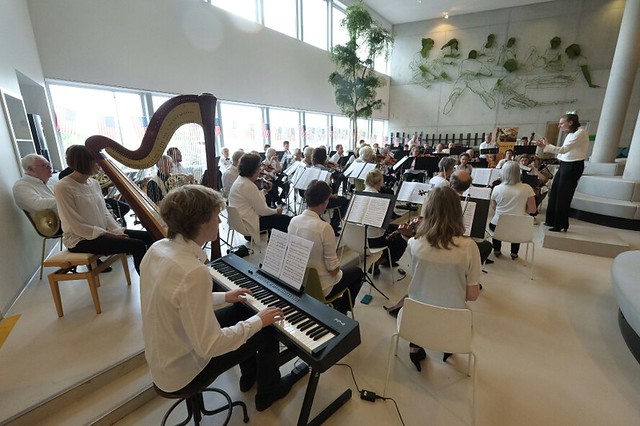